Hey everyone! So let’s talk Dragonball Z : Resurrection of F,

This movie is the second installment of the Dragonball Z “revival” since its predecessor, “Battle of The Gods”. For those who want my thoughts on that movie, I’ll tell you right now…Meh. Moving on!

Funny enough when I started watching this I was really into it. Resurrection of F was confronting all the things that I hated about the Dragonball series since the Cell Saga (That is for another post or video for another day).

[Now before we get deep into this, I have and will be making a lot of references to the TV series, in hopes that those who are reading are somewhat familiar with it. That being said, you should get a good feel of my perspective from it either way.]

Now the movie starts with us showing Frieza being brought back to life with Earth’s Dragonballs. After his revival, Frieza wants revenge of course but realizes that he is too weak to fight Goku who’s sure to be much stronger by now. So whats the solution in fighting a man that has nearly ten year advantage since you were sliced to pieces by Trunks? He trains! For Four months! BAM! Problem solved!

Now this series is known for not caring about how broken some progress levels are, but this breaks even the small realm of belief in their universe. Somehow Frieza can evolve from being weaker than android 18 to powerful enough to fight a Sayian’s god form without using a Hyperbolic Time Chamber. Now you see it was at this point where my excitement started to fade. There was scene early in the move with Whis and our two Sayians (Goku and Vegeta), I loved how during the sparring session they would actually use blocks, parries and show signs of martial arts. It reminded me of the Dragonball series when Goku was a child.The fights were slower paced but you followed the moves. Here, even though it was still in this over-powered tier level of fighting they showed a lot of moves and exchanges. This for me made the movie feel a bit different, and reminded slightly of my favorite DBZ movie, The World’s Strongest. 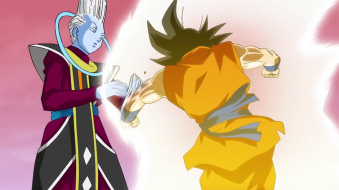 One of the aspects I loathe about this series has been reinforced with gusto in this movie. Why is everyone else so useless? Based on the timeline, Gohan received his mystic powers which at one time made him more powerful than Majin Buu yet due to him not training he barely plays a major role in the movie. I wish Torei would try to buff his Earth fighters or least buff up anyone other than Goku or Vegeta. It hurts the series because no matter what see you know who’s going to win, So here’s a spoiler so brace yourself —– Goku defeats Frieza!

Even more so, despite Vegeta receiving buffs and screen time, Goku has to be the hero. This villain killed Vegeta’s planet and he’s been forced to work for his father’s killer most of his life. This could have been a much deserved Vegeta-centered movie. It’s not just Vegeta that suffers, so does everyone else. The god forms, rather than just being as another way to make our two main leads more powerful, could have be used to empower some of our lesser fighters..

Lastly the movie uses a plot device and I wont spoil what it is but wow, it was set up terribly and when it came full circle you realize that they just needed a way to help complete Goku’s arc of overconfidence. Now to both movies’ credit, Goku has shown through the series to be very overconfident. Such examples are when he left Frieza to live, another being when decided not to eat a senzu bean during his fight with cell all because he believed his son would win. These decisions nearly killed him and others.

Overall the movie was enjoyable, I think we spent too much time with fodder characters. The music was forgettable but of course they had to put the Frieza song in there. Also stay for the credits, the movie has a really nice Reggae-Japanese song. I must admit I enjoyed Frieza, he’s the most entertaining villain and has the best lines. If there was a bad guy to revive he was the right choice. Now moving forward, I need them to bring Gohan back in the scene, Dragonball’s greatest weakness is the predictability of it. Throw us a curve ball, have one of the victories be won through teamwork with the other fighters or at least give those who have have kept up something to do beside fight red shirts all day. I’m somewhat looking forward to the next installment but I dread the franchise is stuck in its ways and like the prideful prince Vegeta, it will only hurt themselves in the end.