So it’s been awhile, I’ve been in a bit of a writers strut but I’ll save that story for another time. Lets talk some nerd television!

So I just caught up with Flash and finally completed season two!

So what do I think of the season as a whole? Well lets see:

So the show is still considered the best comic book show on T.V. NowI don’t feel that’s solely due to its quality. For one it remains consistent in our minds because it has a longer run than the Netflix Marvel shows. With the declining quality of Arrow and the somewhat unstable popularity of Supergirl, Flash has very little direct competition.I still think that it IS the best we have so far but I guess that means we’re moving in the right direction.

Now for the season itself, I found myself reliably intrigued by most of the episodes but hardly blown away by any of them. There were a sum of cool events that carried some cool premises but when executed I was left with a simple, “oh cool”. Perhaps that was enough since I did come back every episode hoping that the Flash would evolve or least do something remarkably cool.Instead I’m given interesting scenes that either disappoint me or give me hope… then destroy them

I enjoyed how Flash is not afraid to embrace the comic material and it’s always benefited from not trying to adjust the tone so it doesn’t seem corny. I like the humor and banter for the most part and even at times when it seems out of place, I still laugh. I think Sisco is where most of that credit is due to, his lines are sometimes lame but he delivers them so well, he alone makes it funny. 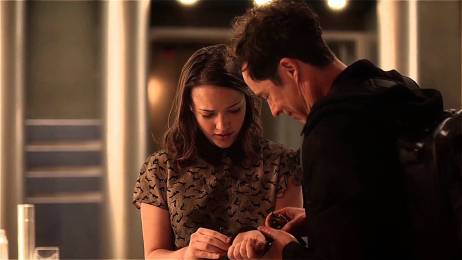 The Earth Two duo, Harrison Wells and Jessie were best additions to the season. The actor for Wells is so friggin good from playing this somewhat stiff but passionate mentor, who was secretly a hateful villain. Then he plays an arrogant but caring father who has such a diverse spread of good and evil within that we explore as the show goes on. You understand the lengths he’s willing to go for his daughter and it all makes sense. I recall his last line to Barry, “I’m a better man than I was when I arrived,” and its true; you see Well’s progression and instead of wishing he would leave the show, I wanted his story arc to be resolved. And lastly to the actor’s credit, after ALL that has happened on Flash, my favorite scene was in episode 17 when Barry meets the Reverse Flash again in the past. Jesse was another addition I enjoyed, and while she is the prettiest girl on flash next to Patty(#1 girl) her intelligence and bond with her dad were nice scenes to see. She was slowly getting on my nerves when she couldn’t forgive her dad for killing a man to save her. I know that sounds heartless and I understand why she was mortified but her angst was going for so many episodes and I was hoping this wasn’t going to be an all season thing. Luckily it was resolved fairly quickly.

The West family….Sigh….Joe… I know you have two shoulders…. And I know you cannot carry Iris and Wally on your back. I know you want to but they’re just too heavy with mediocrity when the shows asks of them to emote. Joe is the closest to an emotional anchor I have  for this show. He often plays the smart detective who cant get a clue with his Wally West arc. He acts more like a father than Barry’s father does and not just in the sense of what a father should be, but when they talk I feel so very often that this kid who has no resemblance to him is honestly HIS SON. Those moments worked and Joe performed those well. He seems to be the only one who thinks rationally a lot of the times, for example when his new son was caught by Zoom, Joe was seriously conflicted and leaned on the side of Barry not giving up his powers to save him. Now again that may seem cold, but who would stop Zoom once Barry gives his powers up from killing Wally and everyone else? But since Barry cant get turned on unless he’s needlessly throwing himself in danger of course he immediately gave himself up. Why? Because he’s a hero? We’ll come back to that. Wally West is the newest addition to the family annnd I’m about ready for him to leave. He arrives on the show as angsty as a Zack Snyder hero and slowly develops into something only slightly less annoying. First he was not listening to Joe about his dangerous life style, then when he comes around he decides to not listen to Joe about helping out other people despite having no powers. He nearly gets killed twice and he simply says, “I have to do something!” …So stay in school! Major in law! Wait until you actually get powers before you try to fight super powered villains without so much as a pistol! …..

Now moving on to Iris….*sigh*….I can’t.. I just don’t like this Iris.While some characters have evolved as a person, Iris’s only evolution is that she now has feelings for Barry. They gave this random “brotha” for her to hook up with, whom the writers of the show have forgot about instantly. While I’m glad they did not put Iris up with someone else so Barry can sulk over them again, it was just odd how he was introduced and forgotten, there’s no point for him being there at all. She realizes her love after seeing all these clues from the future and other Earths. It would have served that moment so much better if she was unaware of these things and eventually understood her feelings on her own. Bur instead we get a conversation showing how all the evidence seems to encourage her to say, “hey maybe we’re made for each other!” That coupled with her expressions that range from “I’m acting like I’m sad” face to “Try and guess what I’m feeling” face, I despise any scene that requires her to be front and center. 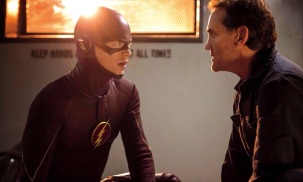 So about Barry’s dad, Henry, he’s more like a coach for Barry rather than a father. He seems out of place and when they tried to include him in the more intense scenes he just doesn’t fit. Ya know I imagine everything Henry says to Barry is in the form of some sappy encouragement. “Ya know son, I just want you to know that no matter when…NO matter why… You can take a dump in any toilet you wish, and I will love you all the same with whatever decision to make- because you’re my son and I love you”.The ending twist was obvious and when he puts on the suit again he looked terrible. That’s all I have for him. 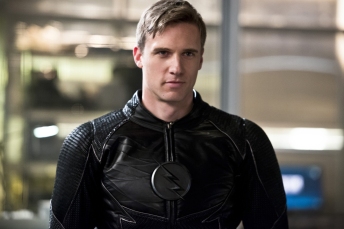 Now regarding Hunter a.k.a Zoom, I enjoyed him as a villain. He was punk-bred throughout the beginning of the show . But once he became a villain I liked his scenes with and without the mask. The only thing that bothered me was for some reason, once he puts on the mask he drags his words and emotes with his hands. It’s so odd that he is literally another villain when puts on the mask. Once again, Zoom was an entertaining villain mainly for the one scene where he wrecked Barry and dragged him around the city. Zoom was a kid who had a horrible childhood and started murder at very young age but did they explain why he is so smart? Ah well no matter.

I will save Barry for another main article. However I will say this, Barry has been getting more tiresome. They have ran the CW formula for superheroes into the ground so many times with Barry that he’s literally going to catch up with Oliver Queen in his self loathing routine. He had a great moment with the speed force but mostly he’s been an emotional roller coaster and I’m just not sure what character they are trying to develop him into. Perhaps they are not trying to evolve Barry but just keep throwing stuff at him. 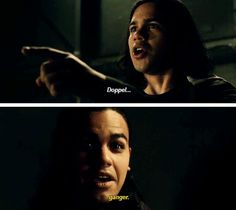 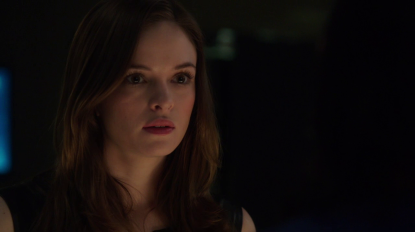 Caitlin Snow is a bit bleh, she’s been through a lot and was reduced to fragile and distressed for nearly half the season. Whether she was mourning over her ex boyfriend or been traumatized by her new almost boyfriend, she was just there. Cisco is always a delight to watch. I especially enjoyed the range he displayed with his doppelganger on Earth Two. He also seems to have trouble with emotional scenes but I don’t think that’s an issue since he does comedy so well.

Overall the season was entertaining, I often would miss a few episodes then catch up. I did lose interest in the show at times but it will always pull me back .It was plagued with so many of our heroes making silly decisions and the villains giving so many handicaps to our heroes that you become distracted by it. When we finally reached the end, it had a setup for next season that is about as interesting as the entire season two. The possibilities are endless and I cant wait.

Well that’s it! I’ll post a little tid-bid about Barry in detail soon. Glad to be back writing! See ya.